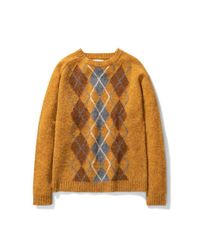 We check over 450 stores daily and we last saw this product for £180 at Trouva.

Sweaters and knitwear from Top Brands

The argyle pattern derives from the tartan of clan campbell, of argyll in western scotland. It was originally used for kilts and plaids in the 17th century. Argyle knitwear became fashionable in great britain and then in the us after the first world war. The birnir argyle is made from british lambswool and is constructed using a traditional intarsia technique. The jumper combines traditional workmanship with fresh colours. The jumper features single layer rib at collar, cuff and hem. 100% lambswool british yarn made in romania. Colour: yellow