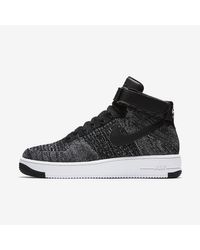 We check over 450 stores daily and we last saw this product for £115 at Nike.

Nike Air Force 1 Ultra Flyknit Men's, Black, Size 6 (EU 40). Ultra-lightweight: The Nike Air Force 1 Ultra Flyknit Men's Shoe weighs 50 percent less than the '82 hoops original thanks to its all-new, ultra-breathable Nike Flyknit upper. Strategically crafted Flyknit panels add dimension while remaining true to the AF1 design aesthetic. Lightweight breathability: Woven Flyknit yarns integrate areas of high breathability, stretch and support where you need it most, conforming to the shape of your foot for a comfortable, lightweight feel. Superior cushioning : The lightweight, injected midsole includes an encapsulated Air-Sole unit in the heel for long-lasting cushioning and impact protection. More details : Adjustable ankle strap with a hook-and-loop closure for a locked-down fit, Synthetic leather heel tab and tongue for a premium look, Pivot points for smooth multi-directional transitions, Rubber pods under the toe and heel for durability, Air force 1 origins: Transcending foot coverage since 1982, this former basketball shoe was coined after Air Force One, the aircraft that carries the President of the United States. It was the first basketball shoe to house Nike Air, revolutionising the game for players like Moses Malone and Charles Barkley while rapidly gaining traction around the world, from the hardwood to the tarmac to the core of hip-hop culture. Today the Air Force 1 stays true to its roots with soft, springy cushioning and a massive midsole, but the Air technology takes a backseat to the shoe's status as an icon. Flyknit origins: Nike Flyknit technology was inspired by feedback from runners craving a shoe with the snug (and virtually unnoticed) fit of a sock. Nike embarked on a four-year mission with teams of programmers, engineers and designers to create the technology needed to make the knit upper with static properties for structure and durability. Then the precise placement of support, flexibility and breathability—all in one layer—was refined. The result is a featherweight, form-fitting and virtually seamless upper. This unprecedented precision maximises performance while reducing material waste by an average of 60% compared to traditional cut and sew, saving millions of kilograms of material from reaching landfills. Colour: black 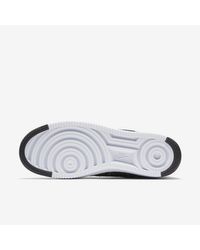 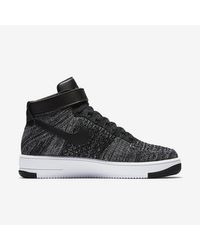 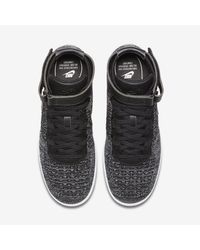