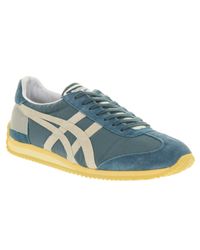 We check over 450 stores daily and we last saw this product for £40 at Office.

Originally released in 1978, the californian from japanese brand onitsuka tiger, were named after the city that influenced the running trend of footwear in the late 1970's. This vintage version is presented in premium suede and breathable nylon mesh in peacock blue and white with a reflective 3m heel panel. They also feature a two toned, eva foam mid sole, ribbed outsole which arches at the front and back, a herringbone styled canvas inner and woven branding on the nylon tongue. Colour: blue