The Lyst Index is a quarterly ranking of fashion’s hottest brands and products.

To compile the results, global fashion search platform Lyst analyses the online shopping behaviour of more than five million shoppers a month searching, browsing and buying fashion across 12,000 designers and stores online. The formula behind the Index takes into account global Lyst and Google search data, conversion rates and sales, as well as brand and product social media mentions and engagement statistics worldwide over a three month period.

33% the increase in searches for Nike sneakers since last quarter 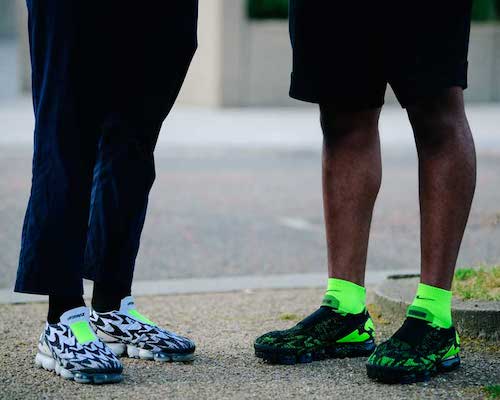 It was a turbulent first quarter for the fashion industry, reflective of the global political and cultural tensions affecting consumer mindsets worldwide. The longest U.S. government shutdown in history, uncertain post-Brexit Europe, and the “yellow vest” protests in Paris were the context for a subdued international fashion week show season. On social media, a number of the brands in the Index faced “heat” from online communities following the release of certain products. We mourned the passing of revered designer Karl Lagerfeld, and saw the launch of meaningful initiatives worldwide to drive the fashion industry towards a more sustainable future. To reflect and explore this three month period of volatility and change, which was visible across all of the Lyst Index data sets, we’ve expanded this quarter’s brands list from 10 to 20 for the first time.

Perhaps unsurprisingly, the most dramatic brand spikes in social media mentions and engagement this season were driven by moments of controversy; five of the hottest 20 brands found themselves under public scrutiny this quarter. With call-out culture — as championed by @DietPrada — becoming more prevalent, some of these labels took action in order to embrace diversity and inclusion. Gucci invested $10 million into the creation of a new programme to help improve diversity and inclusivity; Burberry launched a staff training plan and explained its new strategy to “increase our consciousness and understanding of social issues” on Instagram. Prada, meanwhile, created a new Diversity and Inclusion Council, bringing in sculptor Theaster Gates and filmmaker Ava DuVernay to advise the company. This series of controversial brand moments, followed by the instigation of these timely and important initiatives, suggests that customers are growing acutely more woke, and more vocal.

Looking at the social media insights, alongside the weighted global search and sales volume metrics that make up the Lyst Index hottest brands ranking, the results reveal that luxury fashion shoppers seem to be responding to these initiatives. Off-White, Gucci and Balenciaga remain jostling for the top three positions, while Saint Laurent and Palm Angels have seen the biggest movements up the Index this quarter, jumping 17 and 11 places respectively; and with a 33% increase in searches for Nike sneakers since last quarter, the brand went up 3 places. As brands and customers navigate the new socio-cultural climate across all touchpoints, the most meaningful driver of fashion searches and sales remains a standout, must-have product.

A sporting hijab is the 7th hottest fashion product in the world this quarter. Before its initial release in December 2017, Nike spent years working on the Pro Hijab with a variety of Muslim female athletes including fencer Ibtihaj Muhammad, figure skater Zahra Lari, and weightlifter Amna Al Haddad, who provided the brand with feedback on its prototypes. “You have no idea how important this is,” says Amna Al Haddad. “It's going to inspire girls worldwide to follow their passion for sports." While searches for the hijab have steadily been increasing since its release, demand went up 125% on Lyst this quarter after French retailer Decathlon abandoned its plans to sell a sporting hijab following threats and a surge of complaints. The news boosted Nike’s social mentions by 4,900%.

Footwear and accessories still dominate the list. Championed by the likes of Jennifer Lopez and Alicia Vikander, the Alexander McQueen oversized sole sneakers top the list of Hottest Women’s Products in the first quarter of 2019; they are currently being searched every 2 minutes on Lyst. The Gucci Ace sneakers remain in the top 10 most searched products since last year, as demand for the style has stayed strong and stable over the last three months. Meanwhile, the studded Chloé Sawyer slides have seen a 273% increase in searches since January. Despite the continuous appeal of blinged-out shoes, this quarter’s data suggests a shift towards more minimalistic styles. Has the “ugly” shoe trend reached its peak?

While the desire for Instagram-friendly sneakers may be slowing down, four statement accessories have been igniting heat amongst millennial customers. In a new revival of bouji hair accessories, a trend that has inspired numerous copycat versions sold at every price point, Prada’s stud-embellished headband has been a bestseller. It was responsible for a 300% increase in searches in just 2 months, earning the second place in the Hottest Women’s Products list. The pocket-sized Jacquemus Chiquito bag was an instant fashion meme when it appeared on the runway. Playing with proportion is becoming a signature move for the French designer; following on from the viral La Bomba hat, the Chiquito has boosted the brand’s social impressions by 1,831% and sparked thousands of searches on Lyst. In a matter of weeks, multiple colorways quickly sold out across online retailers.

The Proenza Schouler tie-dye turtleneck enters the list as this quarter’s 9th most popular product. With a 154% rise in searches on Lyst and over 32,000 social mentions, “tie-dye” is one of the fastest growing fashion search keywords of the year so far. Since appearing on the SS19 runways, the influencer-approved trend is resonating with customers across all price points. While Proenza Schouler pieces were the most wanted by luxury shoppers, pieces by Ralph Lauren, Zara, ASOS and Forever 21 are also trending. 2019’s tie-dye feels culturally relevant; a sign of hope and freedom in the uncertain political climate that is currently prevailing. “In the Trump era when right-wing politics is so loud, I think tie-dye can be viewed as a peaceful, but defiant protest against conservatives,” R13 founder Chris Leba said in an interview.

"For the first time ever, sneakers make up the entirety of this quarter’s Hottest Men’s Products list. The sneaker market continues to power exponential growth for both luxury and sportswear brands, and Lyst data shows athletic footwear is now the most powerful menswear category worldwide in terms of search and sales. As sneaker culture continues to captivate a global audience, and the growing resale market evolves, the industry is expected to reach $95.14 billion by 2025. More than 25 million people talked about sneakers on social media this quarter.

With 7 sneakers in this quarter’s top 10 Hottest Men’s Products, and over 7 million social mentions in the last 3 months, Nike dominates this category. While one pair of Nike Air Force 1 was viewed every minute, the Nike LDV Waffle x Sacai sneakers sold out almost immediately when they were released on the Japanese label’s site, following months of teasing on Instagram. The brand also continued its popular collaboration with Supreme, releasing a new version of the retro Air Max 98 silhouette that generated over 77K social impressions. In ninth position, the Nike x Fear of God futuristic sneakers generated major hype; three months after its release, the resale price for the specific design is already 267% over its original retail price.

Creating and sustaining hype remains a powerful marketing tactic for sneaker launches. For the drop of the new “Geode” colorway, Kanye West and Adidas fuelled demand by releasing a limited number of the sneakers at pop-up Yeezy lemonade stands, relying again on Kim Kardashian’s reach to draw increased media attention to the project. All the proceeds collected from the sales were donated to one of America’s leading mental health charities, a move that boosted the brand’s social mentions by 142% in 24 hours.

Seasonality also plays an important role in this quarter’s Hottest Mens Products, which includes Spring updates on versatile classics. Converse saw a 17% rise in searches for the classic Chuck Taylor All Stars (which have been benefitting from a renewal in interest every Spring for the past 5 years), and demand for sustainable brand Veja went up 22% thanks to the popular V10. While hot limited edition, loud and luxury sneaker shapes continue to make waves, these classic styles are delivering on sales volume worldwide."