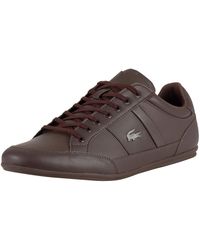 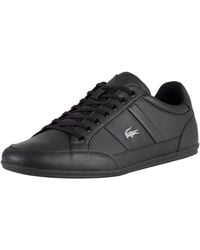 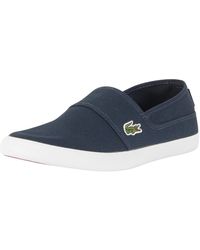 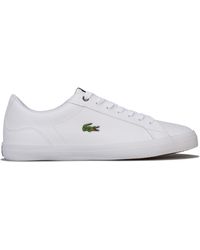 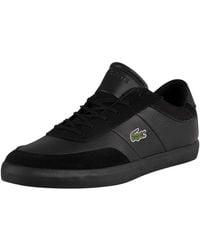 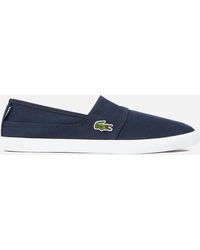 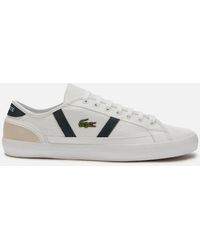 With the promise of a crocodile-skin suitcase if tennis superstar René Lacoste won a match at the French Davis Cup in 1923, the nickname that was to become Lacoste's emblem was born. The piqué polo shirt that was to revolutionise what players were wearing courtside followed shortly in 1933 too. Now more than 80 years later, Lacoste continues to draw on its sporting heritage with a collection of shoes and trainers that merge functionality and style for life on and off the court.

With the promise of a crocodile-skin suitcase if tennis superstar René Lacoste won a match at the French Davis Cup in 1923, the nickname that was to become Lacoste's emblem was born. The piqué polo shirt that was to revolutionize what players were wearing courtside followed shortly in 1933 too. Now more than 80 years later, Lacoste continues to draw on its sporting heritage with a collection of shoes and sneakers that merge functionality and style for life on and off the court.

The iconic label behind the crocodile motif, Lacoste proves its breadth beyond polos with its range of men’s sneakers. Influences of Lacoste’s tennis heritage can be spotted throughout its collections, merged with contemporary tones in the form of bright colors and playful prints. Read on for our men’s Lacoste sneakers buying guide, which will help you narrow down the styles that work best for you, decide on the size you should go for and how to care for them to ensure they last a lifetime.

The Most Wanted Men’s Lacoste Sneakers

Lacoste features men’s UK, US and EU sizing on its shoe boxes and inside each sneaker. You can use the below chart to see how standard country sizing corresponds with the length of your foot in inches and centimeters.

How To Care For Your Lacoste Sneakers

Lacoste takes pride in the quality craftsmanship demonstrated across all its designs. Respecting the premium nature of your Lacoste sneakers entails providing appropriate care to ensure they remain a staple in your closet for years to come. Find some simple steps below for how best to care for your Lacoste footwear styles.

1. The best way to keep your sneakers looking their best is to avoid markings in the first place. This can be done by using a protective spray or cream on the shoes before wearing them. Canvas and rubber sneakers will likely call for a protective spray while premium fabrics like leather may require cream or wax.

2. If you do find that your shoes have accumulated marks or stains, we recommend cleaning with a specialist cleaner, clean cloth and soft bristle brush. Be sure to remove any surface dirt or dust before applying the cleaner. Rubber soles can be cleaned using a toothbrush and gentle soap and water.

3. To store your sneakers when not in use, we recommend placing them into an airtight plastic container and storing them in a room with low levels of humidity to avoid damp. Avoid placing the shoes in direct sunlight areas as this may encourage discoloration.

What materials are used to make Lacoste sneakers?

The casual style of Lacoste lends itself to the majority of its sneakers being crafted from classic cotton, canvas or rubber materials. Leather and suede constructions can also be seen in some of the label’s sneaker styles, like the Chaymon, Carnaby and Court-Master.

What does the Lacoste crocodile on my sneakers mean?

The Lacoste crocodile motif stemmed from the labels found, tennis player René Lacoste’s nickname. After losing a bet in which René had his eyes set on a crocodile luggage set, the press began referring to him as “The Crocodile”.

How can I tell if my Lacoste sneakers are authentic?

It is recommended to only purchase Lacoste products through its official webshop or through an authorized retailer. By doing so, you are able to guarantee that the product you are purchasing is an authentic Lacoste product. Should you wish to buy a Lacoste product elsewhere, we recommend inspecting the quality of the product and distinctive features such as the Lacoste crocodile logo for any abnormalities in shape or color.